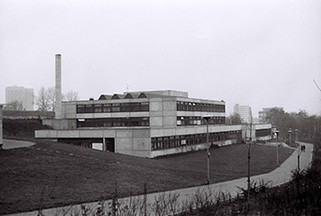 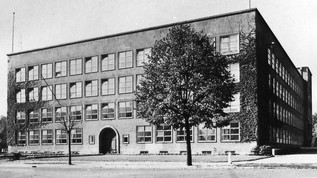 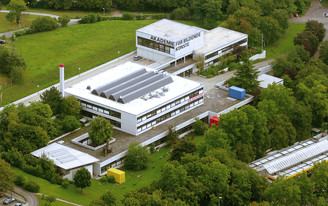 The Academy of Fine Arts Mainz has a chequered past dating back to 1757. Founded by Elector Johann Friedrich Karl von Ostein as a painting and sculpture academy, it is one of the earliest such institutions in the German–speaking world. However, it lacks the long-term historical continuity that distinguishes other art academies. In fact, it was replaced by a drawing academy as early as 1785 and affiliated with the Electoral University, a development that was to be symptomatic of its subsequent history. Nowadays, after a turbulent past, the Academy of Fine Arts Mainz—boasting a model of semi-autonomous integration into a university that is unusual for Germany—is proud to stand as a recognised art academy on an equal footing with other art academies.

ROOTS REACHING BACK TO THE 18TH CENTURY

It was in 1785—not even half a century after it was founded in 1757, and before the end of the 18th century—that the drawing academy, which had been integrated into the university, had to close again, due to the dissolution of the university under French rule. What followed were difficult times for art in Mainz. Due to political upheavals and ever-changing power relations, it was not possible to continue working or even work towards a viable fresh start. It was not until 1841, following various failed private initiatives to establish art schools, that a drawing school for craftsmen was able to open again, from which an arts and crafts school later emerged. Although a new building was constructed for the school in the 1920s, one of the largest and most modern of its time, the Nazis prevented the school from continuing its successful work after they seized power. The newly created Staatsschule für Kunst und Handwerk (State School for Arts and Crafts) then moved into the building.

In 1946, the Johannes Gutenberg University Mainz (JGU) was reopened. That year also marked the beginning of a more recent history, a complex trajectory in which artistic studies in Mainz finally gained a higher profile at the beginning of the 21st century. To set things off, the Staatliche Bau- und Kunstschule (State School of Architecture and Art) was opened on 3 October 1946 in Mainz—which was declared the capital of the newly formed federal state of Rhineland-Palatinate. However, all efforts to found an independent college for liberal and applied arts failed due to the reluctant commitment of the state and city as well as the economically difficult conditions in the destroyed city of Mainz.

In 1956 the art school was converted into a regional art school, in order to bring a certain balance to the situation. Yet all hopes that the regional art school would be upgraded to a fully recognised arts university failed. It was the art education students in particular who demanded that the school be granted university status. But instead of an art academy being established, the regional art school was closed in 1959. A new engineering school and a school of applied arts were founded, as well as an independent university institute for art and crafts. This gave rise to today’s institutions, the Hochschule Mainz / University of Applied Sciences  (formerly a technical college) on the one hand and the Academy of Fine Arts Mainz on the other. Compared to the other federal states, which were intensifying their efforts at that time, there remained ‘special circumstances in the state of Rhineland-Palatinate, which does not have an academy of the arts,’ as Friedrich Gerke, the director of the Institute of Art History at that time, summed it up in 1955.

A NEW BUILDING FOR THE ART EDUCATION DEPARTMENT

As the university’s ‘Department of Art Education’, however, its former independence was lost—a considerable regional disadvantage compared to rival art colleges in the other federal states. It was not until 1986 that the fine arts programme was created, thus laying the foundation for the university’s current status.

However, the new designation ‘Department of Fine Arts’ itself—not to mention spatial and staffing problems—made it more difficult to remain competitive at a time when independent art academies were being founded in other federal states and existing institutions were being considerably strengthened. Furthermore, it was not possible to do justice to the modified syllabus with a course still focused on the teaching profession.

TAKING THE UNCONVENTIONAL ROUTE OF ‘PARTIAL AUTONOMY’. THE PATH TOWARDS THE PRESENT-DAY ACADEMY OF FINE ARTS

The 1990s were marked by a gradual dismantling of the craft-oriented restrictions that were still leftovers from its days as an arts and crafts school. This led to radical reforms, which were carried out from within and implemented while retaining the institutional framework. It may be argued that there no other institution at that time where there was more discussion about the working conditions in art programmes than in Mainz. New courses were created, professorships were reallocated, classes were formed, additional workshops were set up. Until the 1980s the majority of the teaching staff had been recruited from the field of art education, with art teaching qualifications being the decisive criterion for appointments, but now artistic profiles became the key factor in the recruitment process. In 2001, this led to the department being renamed an ‘Academy of Fine Arts’, which continued to be part of the university but was given the necessary special privileges for art within the framework of its partial autonomy.

In 2010 these changes were finally made visible to the outside world with the new name ‘Kunsthochschule Mainz’ (Academy of Fine Arts Mainz). Through amendments to the Higher Education Act, the state of Rhineland-Palatinate liberated the music and visual arts departments from the departmental structure and gave them the status of colleges within the university. Their special status as semi-autonomous institutions within the university is linked to the mandate given to the university management to confer special rights and duties on the rector and the academy’s council. This opened up new opportunities for self-administration and external representation. As a result, an external rector could be appointed for the first time in 2017.

After these periods of considerable paradigm shifts, the Academy of Fine Arts Mainz is now proud to stand as a recognised art academy—with its model of semi-autonomous integration into a university, which is unusual for Germany—on an equal footing with other art academies. It is a member of the German Conference of Rectors of Universities of the Arts (RKK). The amendment of the Higher Education Act 2020 further strengthened the art academy’s independent structure based on classes and the distinctive nature of artistic teaching it provides.