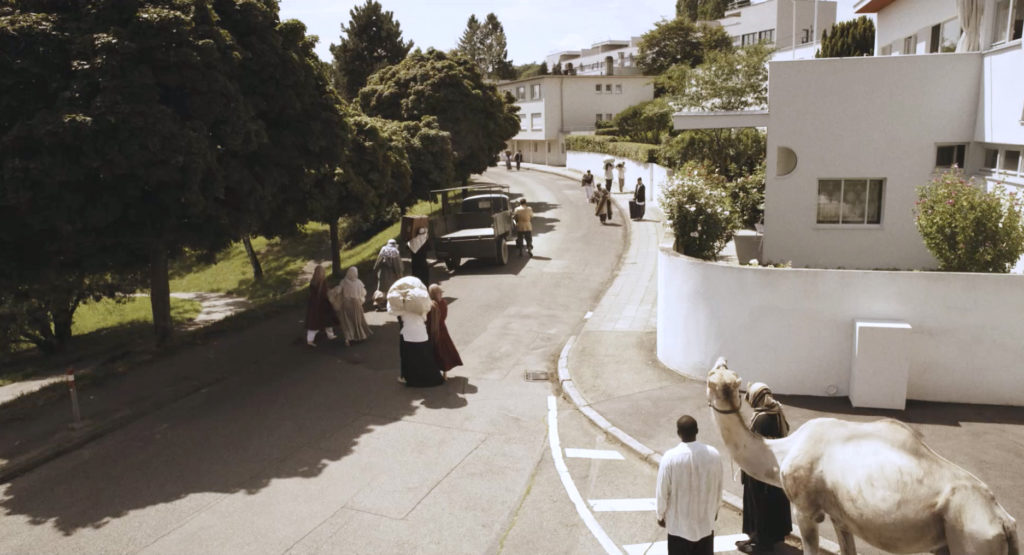 Dani Gal’s artistic practice focuses on the production of ideology through the representation of specific historical narratives in a variety of media in order to question the claims of historical knowledge and to reveal and challenge underlying political preconceptions. Using archival documents toward the creation of cinematic reenactments, sound compositions and other interdisciplinary work, Gal explores the relationship between image, sound and text (written and spoken) to illuminate national interests behind the construction of historical narratives and the process of shaping collective/national memory. His work searches and examines specific historical cases to expose how political powers control certain narratives and repress others as a way to maintain power.

For the occation of his visit in the kunsthochschule mainz, Gal will screen his trilogy of short films:

Nacht und Nebel, Wie aus der Ferne and Weiße StadtThe films explores the complex relationship between victims and perpetrators on a collective and personal level, and their possibility to switch roles. The films are concerned with the complexities of historical accounts between „victims“ and „perpetrators“ in the German, Jewish and Palestinian histories. Gal’s approach to these political subjects tries to challenge historical preconceptions and proposes a possibility for the coexistence of conflicting or competing historical narratives in the postcolonial and post-holocaust context, and address the problematic of state control over narratives.

Nacht und Nebel / Night and Fog, 2011, 22min
A re-enactment of the night Adolf Eichmann was executed by Israeli policemen who later disposed his ashes into the sea. The film is based on an interview with Michael Goldman, a holocaust survivor and a police officer who was in charge of the operation in 1962.

Wie aus der Ferne / As From Afar, 2013, 26min
A fictionalized account of Simon Wiesenthal and Albert Speer’s meeting in the 1970’s where the dialogue is based on the letters the two exchanged. Despite their profoundly contrasting personal histories, they shared common interests. They pursued their unlikely friendship despite controversy and occasionally visited each other. The story was, again, a meditation on how historical events are recalled, recorded, and distorted.

Weiße Stadt / White City, 2018, 25min
On August 16, 1933 Arthur Ruppin wrote the following entry in his diary: Through Dr. Georg Landauer I travelled to Jena on August 3rd to meet Prof. Hans F.K. Günther, the founder of National-Socialist race theory. The conversation lasted two hours. Günther was most congenial but refused to accept credit for coining the Aryan-concept, and agreed with me that the Jews are not inferior but different, and that the Jewish Question has to be solved justly.

The film revolves around the complex character of Arthur Ruppin (1876-1943), one of the founders of the Zionist Settlement who promoted coexistence with the Palestinians before the establishment of the state of Israel. Ruppin was also an enthusiastic researcher of the science of race, which explains his motive in paying a visit to Hans F.K. Günther (1891-1968), the German race researcher and eugenicist who later became a major influence on the National Socialist racial thought. The film shows Ruppin as he is visits Weissenhof Estate, a neighborhood in Stuttgart famous for its modern architecture style, and experiences flashbacks which reflect his views. The monologues and dialogues are based mainly on Ruppin’s diaries.